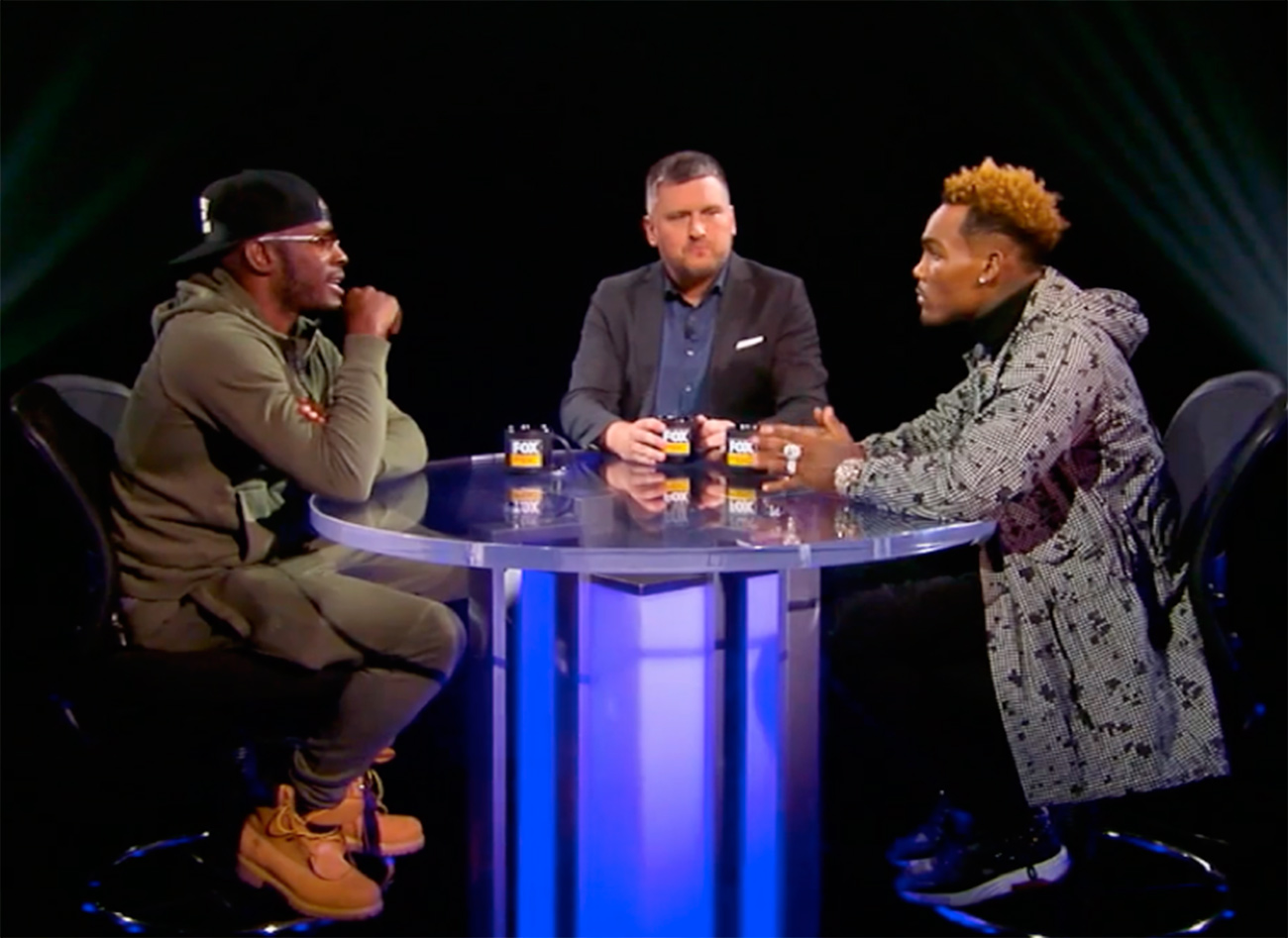 With their rematch set to take place almost one year after their first battle, Harrison and Charlo have kept up the animosity that has boiled ever since their controversial first meeting.

“There’s not a drop of love in my heart for him,” said Harrison “There’s a lot of animosity and there’s only one way to settle it. That’s fighting. I’m the most dangerous guy in the division. I’m 6’1, super-fast, strong and I have all the attributes of a guy no one wants to fight.”

“He’s a fraud,” said Charlo. “He manipulated the system and he isn’t the real champ like I am. I’m the real champion and it will take me going in there and showing why I am the champ. I get to do that on December 21.”
The rematch was originally set to take place in June, before Harrison was forced to withdraw from the fight due to an ankle injury. Charlo went on to knockout Jorge Cota in the main event on FOX June 23. The rematch that didn’t happen has been its’ own saga and only added to the rivalry.

“He wasn’t really injured, we’re all boxers and we all go through things,” said Charlo. “It’s a wear and tear sport. It puts a lot on our mind and on our bodies. If you don’t do it the right way, it’s going to tear you down. Maybe he used the smallest excuse and used it to get him out of the fight. There’s no easy routes in this thing. When you’re at the top, you have to fight.”

“For me, everything happens for a reason,” said Harrison. “Whatever the reason was, I just answered back and said I’ll do better and make the turnaround from it. I never questioned it. I knew my heart wanted to go and keep fighting. It told me to go beat him, because he’s not what he says he is. But my brother and my dad told me that if you’re not 100 percent, no one will want to hear the excuses If you let him beat you.”

Having already squared off at four press conference and multiple “FACE TO FACE” tapings, Harrison and Charlo have had plenty of opportunities for mental battles in anticipation of their encounters in the ring.

“This is going to be easy because I’m already in his head,” said Harrison. “I think he’s trying to figure out what he has to do different to beat me. I’ve got the mental battle won. I have him all riled up, now it’s just about capitalizing.
“I’m living rent free in that head,” added Harrison. “He’s mentally weak. Period. He’s emotional. He fears me and he fears everything about me. He knows I’m a threat. He likes the way I walk. He likes everything about me. He likes the way I talk what I talk.”

“This energy he’s portraying isn’t really him,” said Charlo. “I know something about you. They made you up to be this clown. You have a different animal in front of you now. This won’t be the same Jermell Charlo on December 21. The good thing is, I get a chance to show you and everyone that night.

“I’m a passionate person,” continued Charlo. “I’m a winner. When they took that one from me, of course a passionate person is going to have a different reaction than he would have had. I found out where your heart was. I’ve been able to make more investment into myself to destroy you ever since then.”
With their high-stakes rematch just around the corner, Harrison and Charlo gave their final thoughts on how the second fight will look, and how they will put themselves in position for a career-defining victory.

‘I don’t like ‘phony’ Harrison,” said Charlo. “It’s easy to explain why the rematch will be different. I’m knocking him out. I can’t let them judges make any decisions. That’s what I need. He’s going to sleep. Cold.”

“I’m a better athlete than Jermell Charlo and I will beat this man at anything we do,” said Harrison. “I know in my heart I would never lose to a sucker and he’s a sucker. As long as he’s walking this earth, there’s nothing he can do to beat me. I’m going to dominate this man. I just want to beat him 12 rounds like he stole something.”

ABOUT HARRISON VS. CHARLO II
Harrison vs. Charlo II will see the highly anticipated rematch between WBC Super Welterweight Champion Tony “Superbad” Harrison and former world champion Jermell Charlo headlining the FOX PBC Fight Night and on FOX Deportes Saturday, December 21 from Toyota Arena in Ontario, California.
Televised coverage begins at 8 p.m. ET/5 p.m. PT and features former world champions Guillermo Rigondeaux and Liborio Solis fighting for the vacant WBA Bantamweight World title and rising heavyweight sensation Efe Ajagba taking on Iago Kiladze in a 10-round opening attraction.
Tickets for the event, which is promoted by Lions Only Promotions and TGB Promotions, are on sale now and can be purchased at the Toyota Arena box office and Ticketmaster.com.
Viewers can live stream the PBC shows on the FOX Sports and FOX NOW apps or at FOXSports.com. In addition, all programs are available on FOX Sports on SiriusXM channel 83 on satellite radios and on the SiriusXM app.