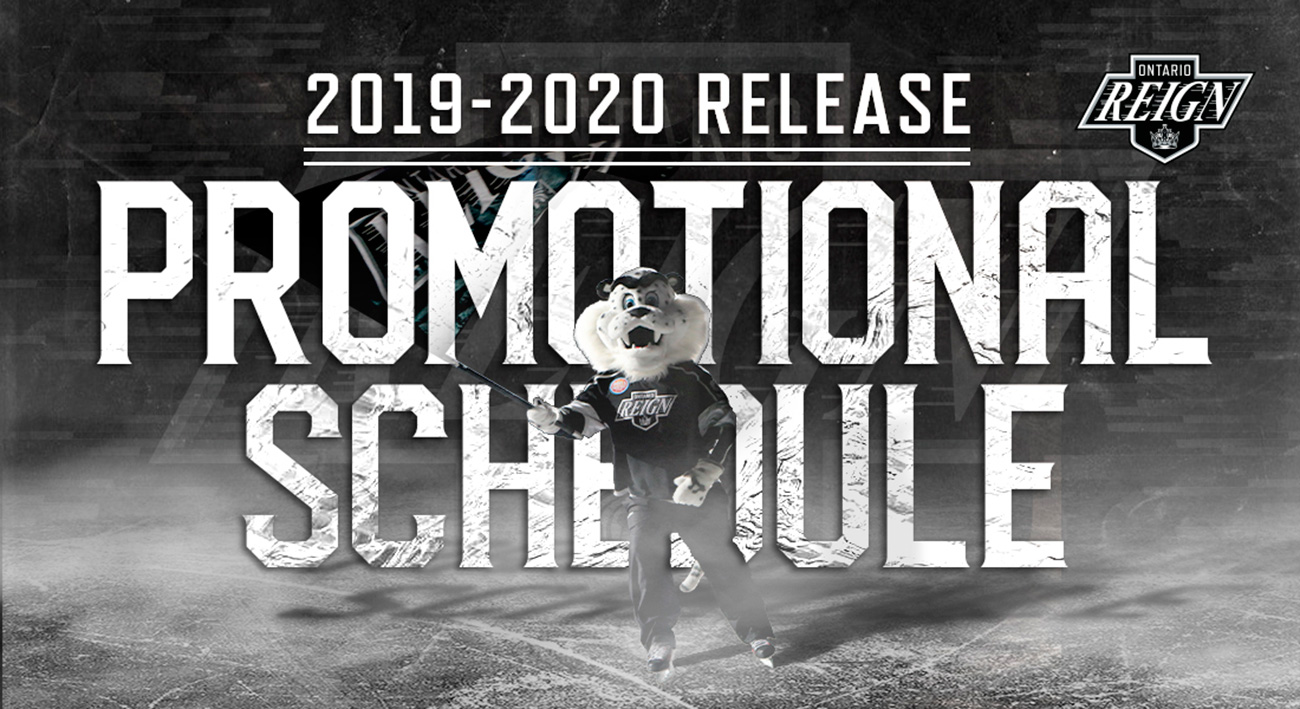 The Ontario Reign’s 2019-20 promotional schedule includes the return of popular theme nights, a slate of exciting giveaway items and a wide array of specialty jerseys

The Reign’s 2019-20 schedule begins with Opening Night, presented by Bud Light, on Friday, October 4, the first time in AHL franchise history that the Reign have opened a season on home ice. Opening Night includes the first giveaway night of the season, a puck, commemorating Ontario hosting the 2020 AHL All-Star Classic presented by Ontario International Airport, on January 26 and 27 at Toyota Arena.

The Reign will have 12 giveaways, for the first 3,500 fans at each game, during the 2019-20 season. The full giveaway schedule is as follows:

A full list of the Reign’s 2019-20 specialty jersey slate is below:

Other theme nights returning for the 2019-20 season include the annual Teddy Bear Toss, presented by Sunergy Construction, on Saturday, December 14. Last season, the Reign set a franchise record with 9,121 stuffed animals donated to Toys For Tots during the holiday season.

Back for its second season is Wild West Night on Saturday, January 18, followed by Kingston’s Birthday, presented by Dave & Buster’s Ontario, on Monday, January 20 with a special 3:00 p.m. start time on Martin Luther King Jr. Day. The Reign will conclude the season with their annual Fan Appreciation Night and jerseys off our backs on Saturday, April 11.

New to the Reign schedule this season is Oktoberfest on Saturday, October 26, Star Wars Night on Friday, December 27 and Hockey is for Everyone Night, presented by Blue Shield of California, on Friday, February 21.

Beerfest, presented by Punch Bowl Social, returns to Toyota Arena with four events scheduled for the 2019-20 season, beginning with Oktoberfest on October 26. Beerfest will also be held on Saturday, January 18, Saturday, February 29 and Saturday, April 4. $2 Bud Light Fridays are also back for the 2019-20 campaign. All Friday games in Ontario will feature $2 Bud Light cans through the end of the first intermission at all concession stands.

Reign fans can reserve their tickets for ten of the biggest games of the season with a mini plan. The Black and Silver plans are five-game packages, each including five theme nights, four of which are giveaway nights. Mini plans are on-sale now by visitingontarioreign.com/mini-plans.

Additional giveaways and promotions may be added or changed at a later date. For the most up-to-date information regarding the Ontario Reign’s 2019-20 promotional schedule, visit ontarioreign.com/games.

The Ontario Reign will begin the 2019-20 season, their fifth as members of the American Hockey League, in October 2019. For more information on the upcoming season, as well as the 2020 AHL All-Star Classic, to be held in Ontario, visit ontarioreign.com, and to secure your seats with a Reign ticket plan, call 909.941.7825.