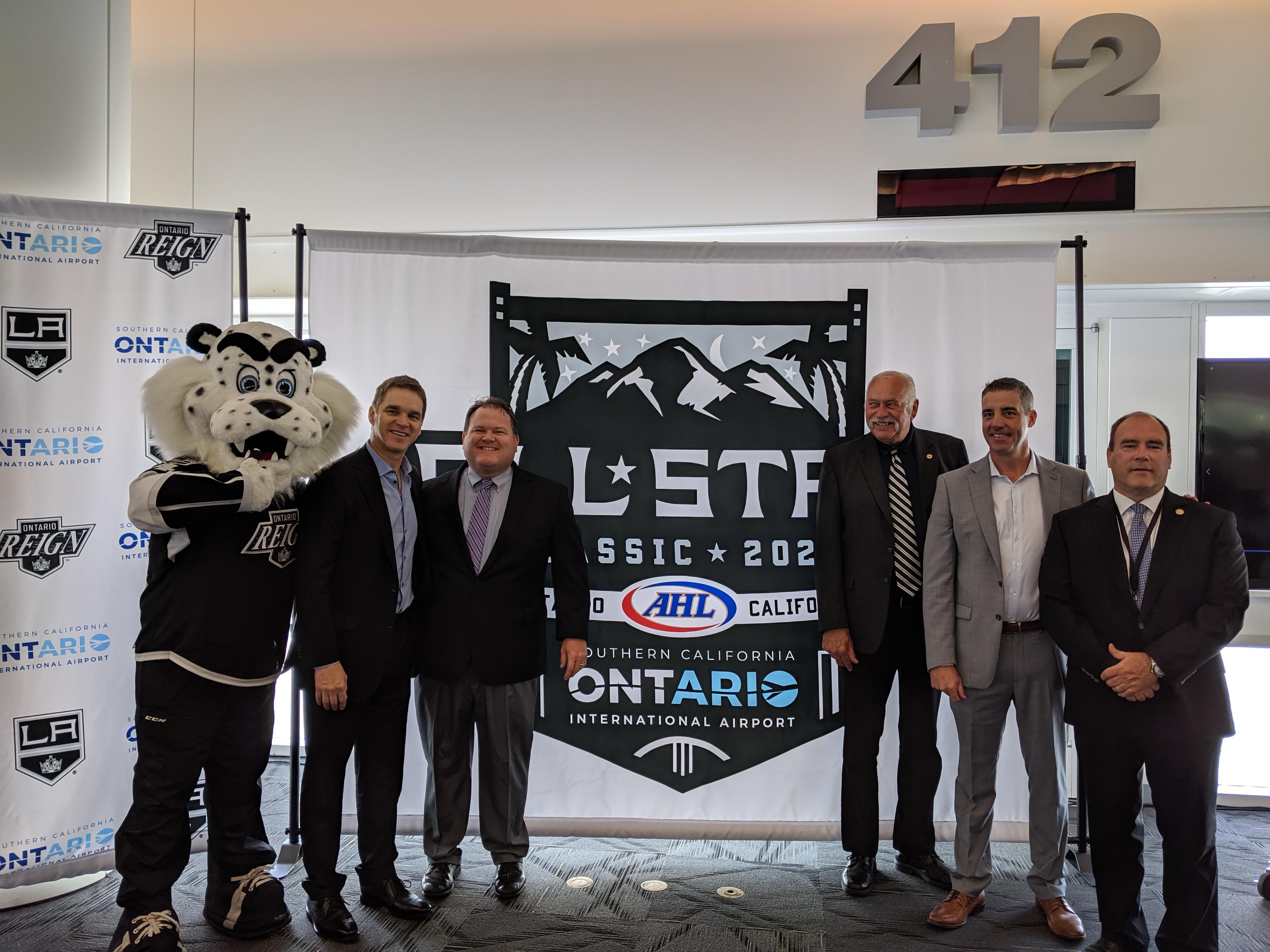 The partnership, which will encompass both the Reign and the Kings, and the official event logo for the 2020 AHL All-Star Classic presented by Ontario International Airport were unveiled in a ceremony earlier today. The event logo features creative influences from the Los Angeles Kings, Ontario Reign and American Hockey League brands, and features the Ontario International Airport logo incorporated into the design.

“Ontario Airport is proud to partner with the Reign and the American Hockey League in bringing this showcase event to the City of Ontario,” said Mark Thorpe, Chief Executive Officer of the Ontario International Airport Authority. “Hockey has an extremely strong following throughout the Inland Empire and Southern California, and we look forward to hosting some of the best young players in the world at the 2020 AHL All-Star Classic.”

The AHL’s All-Stars will head West for the 2020 AHL All-Star Classic presented by Ontario International Airport, which will be held for the first time in California. The event will showcase the Inland Empire on an international scale, highlighting the growth of the game of hockey in Southern California.

“We are excited to have Ontario International Airport as the presenting corporate partner as we bring our All-Star events to the west coast for the first time,” said David Andrews, AHL President and Chief Executive Officer. “The Inland Empire has embraced AHL hockey, and we’re looking forward to celebrating our league’s best and brightest young stars at the 2020 AHL All-Star Classic presented by Ontario International Airport in January.”

“The Ontario Reign are excited to partner with Ontario International Airport, a beacon of economic growth and a great source pride in the Inland Empire,” said Ontario Reign President Darren Abbott. “Our partnership with Ontario International Airport will encompass both the Reign and the Kings and will be highlighted by our marquee event, the 2020 AHL All-Star Classic. We’re excited to join forces and look forward to a successful and rewarding partnership.”

Tickets for the 2020 AHL All-Star Classic presented by Ontario International Airport are on-sale now. Tickets, which include admission to both the AHL All-Star Skills Competition and the AHL All-Star Challenge, are available by visiting ontarioreign.com/allstar.

Ontario International Airport (ONT) is the fastest growing airport in the United States, according to Global Traveler, a leading publication for frequent fliers. Located in the Inland Empire, ONT is approximately 35 miles east of downtown Los Angeles in the center of Southern California. It is a full-service airport with nonstop commercial jet service to 19 major airports in the U.S., Mexico and Taiwan, and connecting service to many domestic and international destinations. There is an average of 67 daily departures offered by nine air carriers. More information is available at flyOntario.com.

The Ontario Reign will begin the 2019-20 season, their fifth as members of the American Hockey League, in October 2019. For more information on the upcoming season, visit ontarioreign.com, and to secure your seats with a Reign ticket plan, call 909.941.7825.